JUNGLE PORCELAIN is a continuation of the artistic inquiry ‘SUSTAINABILITY & SUBSISTENCE’ which Angelika Böck
pursued during her Cambridge Sustainability Residency in 2015, which was an inquiry into the everyday survival practice
of the Kelabit (demonstrated by the Kelabit jungle expert Wilson Bala), an indigenous people living in the rainforest of cen-
tral Borneo, where Böck stayed since 2010. To reflect on her experience of dining in the wild, Böck invited the potter and
artist Uli Aigner to produce a durable ‘tableware’ suitable for her – and her indigenous friends’ - dinners in the jungle.

Aigner is internationally known for her ONE MILLION project, for which she produces unique and individually designed por-
celain vessels which are at the same time objects for daily use of her customers as well as part of her artistic life project.
Each ONE MILLION item is created in collaboration with its user and is geographically tracked over its lifetime – whether
it be shared, exchanged or sold. Aigner thereby has her own approach to reflect on history, tradition and globalization, as
well as sustainability and subsistence.

JUNGLE PORCELAIN is a cooperation which aims to design and produce plates that remain durable for outdoor use for
many years and are comfortably used without a table and may be hung onto a tree as well as serve as a lantern. The
JUNGLE PORCELAIN pieces are made of thick porcelain and are equipped with a hole for hanging. In addition, they can
be placed on a base, which can also be clamped between the knees. This base serves equally as a lantern and features
the design of a bush knife and several animal traps, which Böck got to know as crucial for survival in the jungle.

The set of plates shall be used in the Kelabit Highlands at a permanent campsite which is being frequented for fishing and
hunting, the way protein is still predominantly procured. The idea is to replace widely used plastic plates, corroding sheet
metal or easy breakable porcelain plates, therby enhancing sustainability. At the same time this project draws attention to
the fact that on the island of Borneo it is not an indigenous lifestyle which is responsible for a wildlife reduced or the rain-
forest destroyed. The plates may be ordered via internet (which is being widely used in Bario only since 2017). The current
design for the base of the porcelain plates may be replaced with what matters as a symbol for the individual user - in Bario
or elsewhere - with respect to survival (an order form is provided in this book). 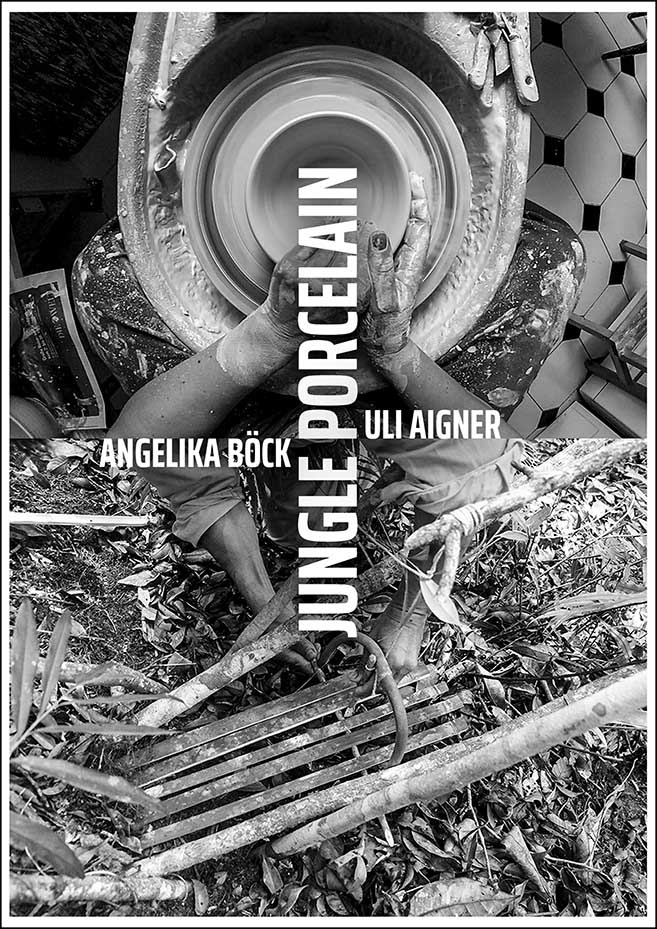 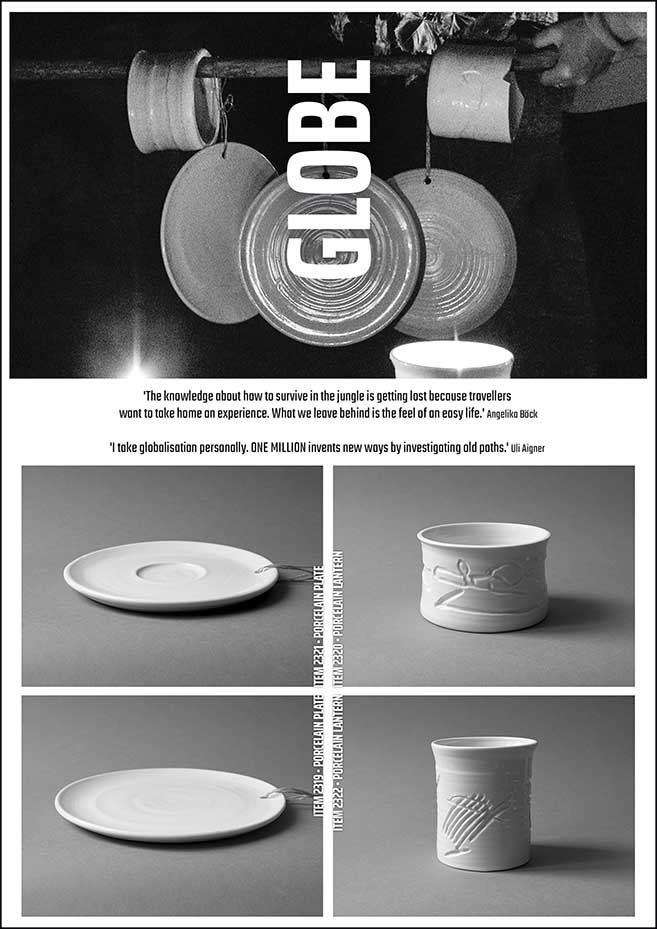 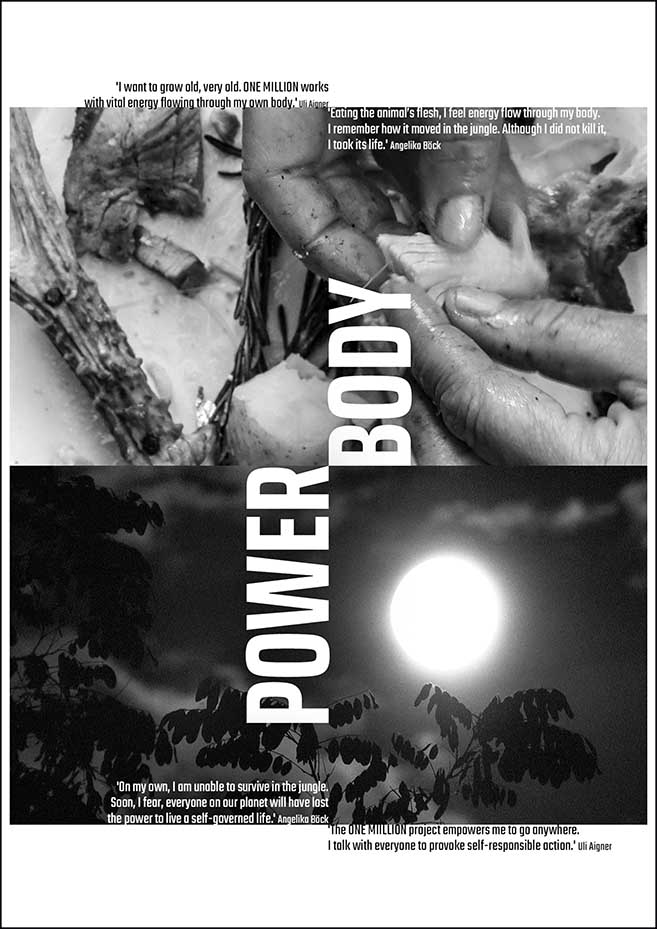 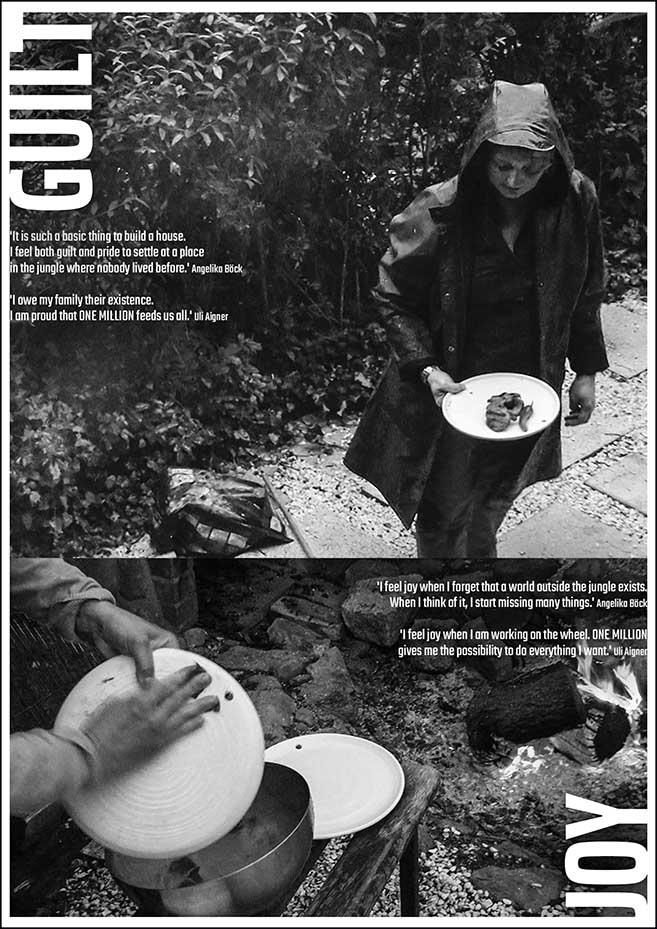 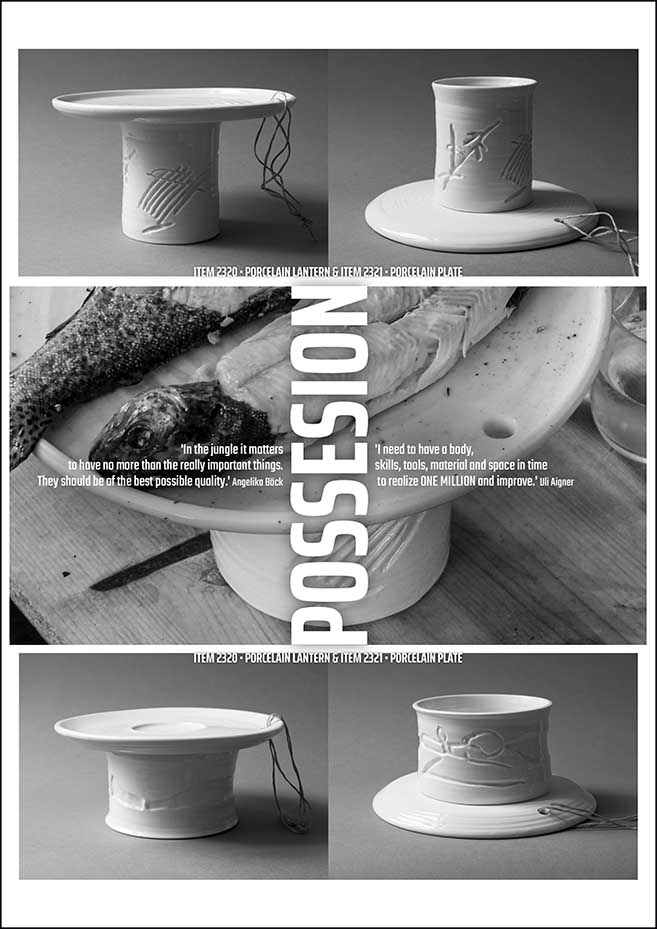 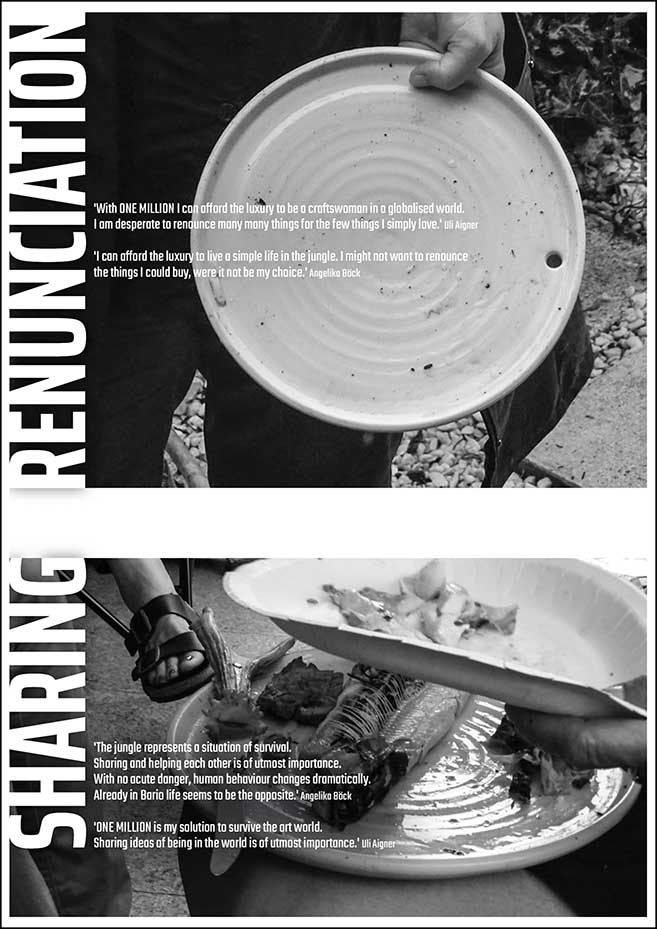 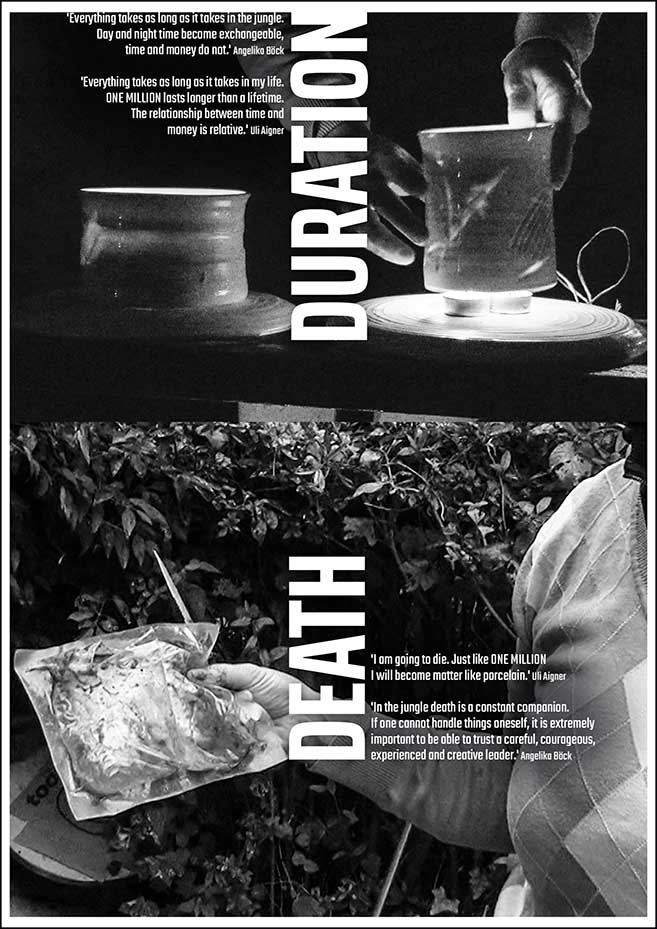 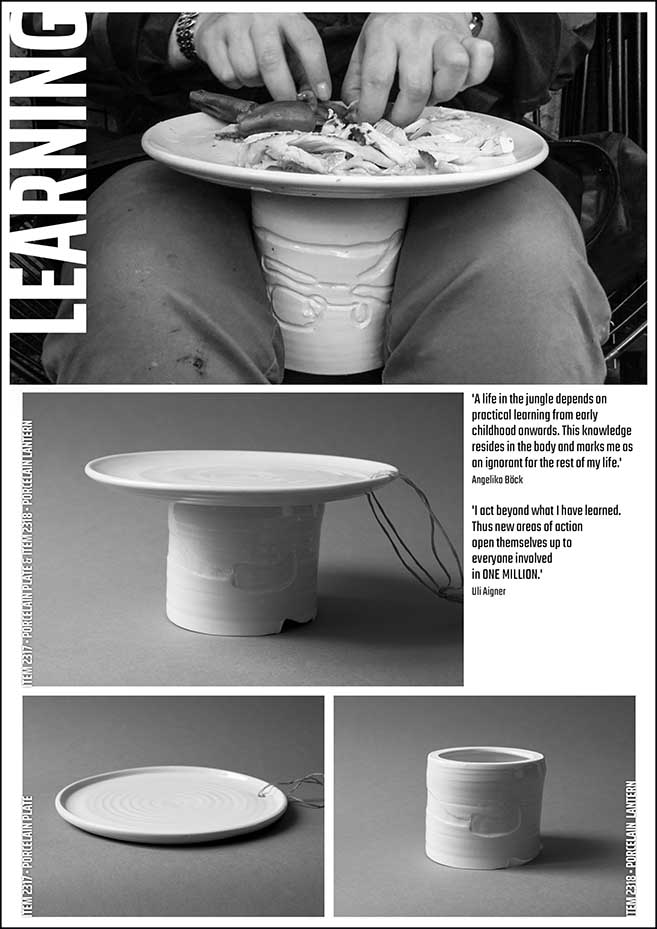 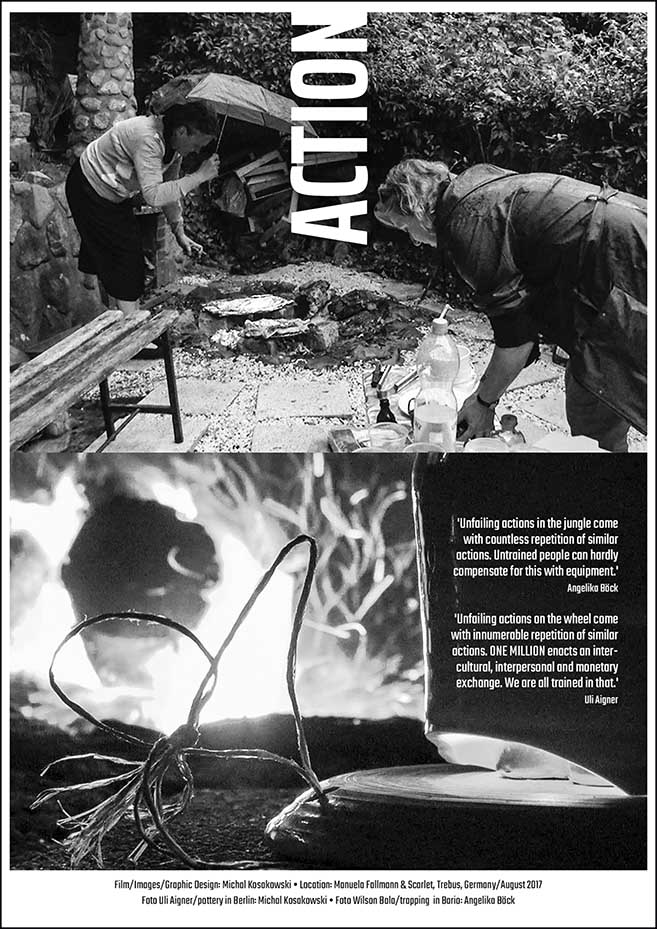